The latest release of estimates from the Distributions of Household Economic Accounts reveals that, despite broad-based increases in wages and salaries, income inequality increased in the first quarter of 2022 relative to the same quarter a year earlier. This increase was partially attributable to the expiration of pandemic-related government benefits that had a larger impact on households in lower-income quintiles and younger age groups. Meanwhile, average net saving decreased for households in each distribution category, as inflationary pressures weighed on consumption.

While the distributions of household economic accounts provide important insight into the trends in household economic well-being and income inequality in Canada, the results in this release focus on the changes in average income, consumption and savings for households with different socioeconomic characteristics. It is important to recognize that not all households, even those with similar characteristics, necessarily experience the same economic or financial situations.

Meanwhile, average disposable income for the lowest 20% of households, at $6,322 in the first quarter of 2022, decreased by $514 (-7.5%), as gains in employment earnings were more than offset by larger reductions in government transfers due to the expiry of pandemic-related benefits at the end of 2021. Despite recent increases in the disposable income gap since the end of 2021, it remains below rates observed prior to the pandemic, which averaged 45.1% over the period from 2010 to 2019.

As governments introduced various support measures at the beginning of the pandemic, starting in the second quarter of 2020, the share of households with non-pension benefits as a main source of income reached 15.8%, while the share of those who primarily earned wages and salaries dropped to 59.0%. Following the expiration of most pandemic support measures at the end of 2021, the shares of disposable income by main source of income moved closer to pre-pandemic rates, at 4.9% for those with mainly non-pension benefits, and 69.6% for those earning wages and salaries as a main source of income. 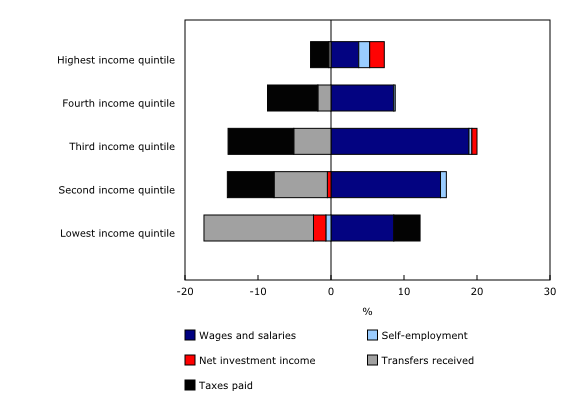 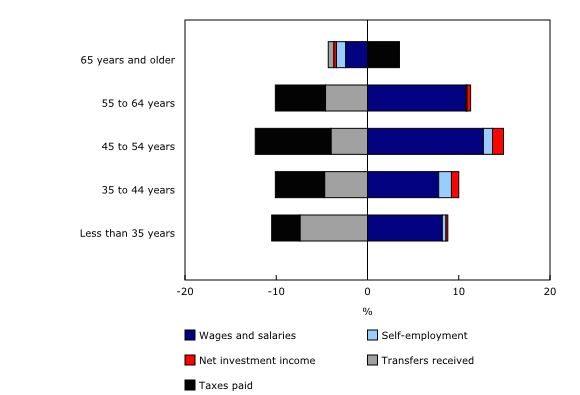 Along with business re-openings and gains in employment earnings over the last year, households in each income quintile increased their spending on most goods and services, especially on housing and utilities, transportation, and food and accommodation services. Average net saving declined the most for the second income quintile, down 95.3% relative to the same quarter of the previous year. Furthermore, net saving for households in the lowest income quintile remains below levels observed at the start of the pandemic in the first quarter of 2020. Households in higher income quintiles tend to have a better ability to absorb increases in the cost of goods and services as a result of inflationary pressures. 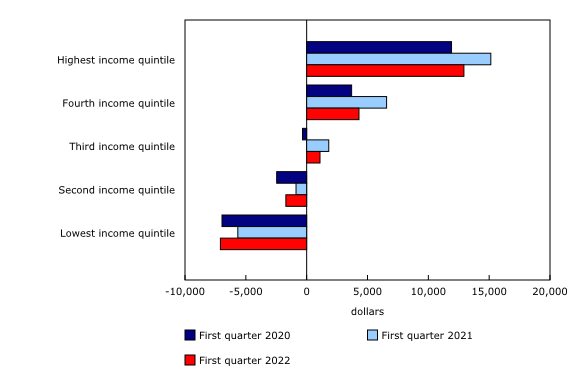 Households in every age group decreased their average net saving in the first quarter of 2022 compared with the same quarter a year earlier, especially seniors (-73.5%) and those aged 55 to 64 years (-65.0%). While net saving for households with an older major income earner dropped more relative to younger age groups, this does not necessarily mean that their economic well-being is worsening, as households in older age groups tend to have accumulated significant pension and other financial assets from which they may draw to fund their consumption. 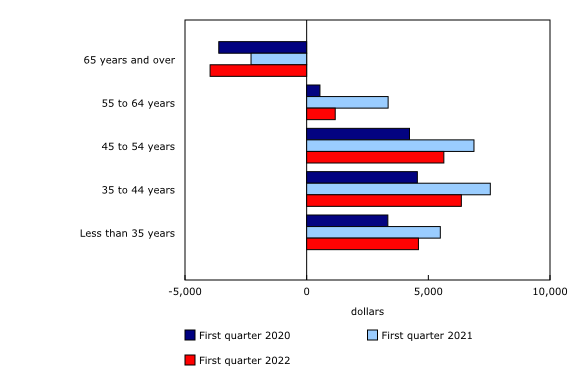 Based on the latest estimates presented in this release, average wages for vulnerable groups, such as those in lower-income quintiles and younger age groups, tend to be more significantly affected by shifts in economic activity. Over time, vulnerable groups’ ability to maintain their average net saving and, by extension, their economic well-being, will largely depend on their ability to secure higher wages in the face of labor shortages and ongoing inflationary pressures. In general, households in higher income quintiles and older age groups are better able to maintain or increase their average wages during uncertain economic times due to their higher skills and more secure jobs.

On January 1, 2016, the world officially began implementation of the 2030 Agenda for Sustainable Development—the United Nations’ transformative plan of action that addresses urgent global challenges over the next 15 years. The plan is based on 17 specific sustainable development goals.

The distributions of household economic accounts for income, consumption and saving are an example of how Statistics Canada supports the reporting on the Global Goals for Sustainable Development. This release will be used in helping to measure the following goal:

Statistics Canada regularly publishes macroeconomic indicators on household disposable income, final consumption expenditure and net saving as part of the Canadian System of Macroeconomic Accounts (CSMA). These accounts are aligned with the most recent international standards and are compiled for all sectors of the economy, including households, non-profit institutions, governments and corporations, along with Canada’s financial position vis-à-vis the rest of the world. While the CSMA provides high quality information on the overall position of households relative to other economic sectors, the Distributions of Household Economic Accounts (DHEA) provides additional granularity to address questions, such as vulnerabilities of specific groups and the resulting implications for economic well-being and financial stability, and are an important complement to standard quarterly outputs related to the economy.

The DHEA estimates released today provide estimates of income, consumption and saving and their sub-components by various household distributions for the first quarter of 2022. The data were also revised back to the first quarter of 2020 in order to incorporate new sources of information at the household distributional level of detail, as well as new benchmarks from the CSMA released at the end of May 2022, which were revised for each quarterly period in 2021.

As with all data, the DHEA estimates are not without their limitations. While some distributions are estimated using timely microdata or micromodels, such as wages and salaries, others, including household final consumption expenditures and social transfers in kind, rely on assumptions or use data from prior reference periods. Users should keep these limitations in mind when analyzing the estimates included in this release.

All values ​​are expressed in quarterly nominal unadjusted rates, unless otherwise specified. As a result, the estimates presented in this release are not adjusted for variations over time that may occur due to seasonal patterns and/or price inflation.

Details on the sources and methods behind these estimates can be found in the publication Methodological Guide: Canadian System of Macroeconomic Accounts (Catalog number13-607-X). See the section “Distributions of Household Economic Accounts” under Satellite Accounts and Special Studies.

The Economic accounts statistics portal, accessible from the Subjects module of the Statistics Canada website, features an up-to-date portrait of national and provincial economies and their structure.

The Latest Developments in the Canadian Economic Accounts (Catalog number13-605-X) is available.