A FURIOUS Scots driver made a miracle escape after his car burst into flames – only to discover a recall had been issued on the motor.

James Scott, 24, was driving his BMW 3 Series 320d on Sunday evening when he noticed smoke coming from the bonnet.

The IT consultant managed to pull over just before a roundabout on Randolph Road, Kirkcaldy, and jump out of the vehicle seconds before the car was engulfed in the “inferno”.

The fireball incident happened just days after James had taken the car for its service at a BMW centre, where he was told everything was in order.

And he’s blasted the German car manufacturers after a recall was issued on the model on the same day over an issue with the “cooler function”, which he claims he was never notified of.

James told the Scottish Sun: “I heard a loud clunk from the vehicle and that’s when I Iost all power. 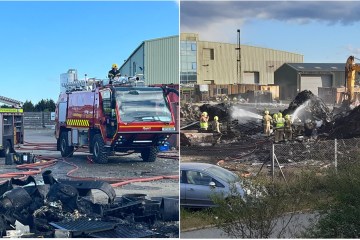 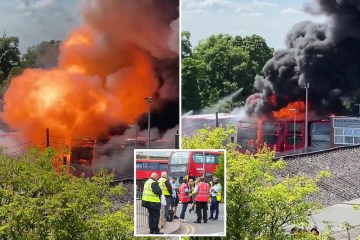 “I pulled over to the side of the road but suddenly noticed there was smoke billowing from the bonnet.

“Then there were flames. I quickly jumped out and called 999.

“I probably had about 30 seconds before the whole thing was an inferno.

“I’ve never had to call the emergency services before so I was very anxious and confused at how this could happen.”

Most read in The Scottish Sun

James’ BMW has been impounded while investigations continue into the cause of the blaze.

Images show the remains of the burnt-out estate car after the fire.

James added: “BMW want to investigate the car for themselves once it’s been released from the insurance company.

“It could take up to a month potentially for a full conclusion as to what caused the fire.

“In the meantime, they have arranged for a courtesy car to be delivered.”

A BMW spokesperson said the recall was rolled out on the same day as James’ car was serviced and that affected customers were contacted by post at the end of July.

They said: “BMW takes any incident involving its vehicles very seriously and we’ve contacted this customer to offer our support and inspect their vehicle so we can establish the root cause.

“Vehicle fires are rare but have many possible causes including external factors and individual cases must be thoroughly investigated.

“BMW Group undertakes continuous quality control and intensive test programs during the development, manufacturing and ‘field use’ of our vehicles.

“As a result of this ongoing work, BMW has decided to implement a recall in the UK as a precautionary and voluntary measure to enhance the EGR- (Exhaust-Gas-Recirculation) Cooler functions on a range of diesel vehicles.

“The first customers included in this campaign were contacted by post at the end of July with further letters to be sent to registered keepers throughout the summer.

“Work will be completed free of charge at the customer’s BMW retailer of choice. Customers can also check their vehicle status at www.bmw.co.uk/recall.

“The vehicle involved in this case underwent servicing work on 11 July 2022, the same day as the recall was being internally rolled out to BMW retailers.

“Any vehicle included in this campaign presenting itself to an authorized BMW service center since 11 July would be flagged for the necessary repairs.”