After 11 months in the hospital, Aydin celebrates his 1st birthday at home with his family

The procedure was the first step in his journey to survive congenital high airway obstruction syndrome (CHAOS), a condition that inhibits the child’s ability to breathe at birth. After 169 days in the neonatal intensive care unit (NICU) followed by more than five months in a rehab facility overcoming further challenges linked to CHAOS, Aydin is finally home with new parents Yadi and Jamaal Martin to celebrate his first birthday as a family of three. .

Multimedia materials, including photos, B-roll package, and interviews with clinical experts and family, are available for download.

CHAOS is a syndrome that occurs when the trachea (windpipe) is blocked or not fully developed. The condition, the causes of which remain unknown, comes with a 100 percent mortality rate unless an intervention is performed.

The Martins got the news in May 2021, 24 weeks into Yadi’s pregnancy. A fetal echocardiogram that showed abnormalities led James C. Nielsen, MD, medical director of the Pediatric Congenital Heart Center at Hassenfeld Children’s Hospital, to consult with Ashley S. Roman, MD, vice chair for clinical affairs—obstetrics, co-director of the Fetal Diagnosis and Treatment Program, and director of the Division of Maternal-Fetal Medicine in the Department of Obstetrics and Gynecology. She instantly confirmed the diagnosis of CHAOS.

“The ultrasound revealed large overinflated lungs, and I immediately knew what was wrong,” says Dr. Roman, making this the second case of CHAOS she has seen in her over 20 year-career, and the 51st case publicly reported in the United States since 1989. “As a result of the airway blockage, the lung fluid cannot escape the fetal mouth , causing the lungs to fill up immensely and swell. The condition would make breathing impossible and fatal for the baby after a traditional delivery.”

After four prior miscarriages, this was not the happy news the couple hoped to hear almost halfway through their pregnancy. “This was our miracle baby,” Yadi says. “We prayed and prayed for him.”

“As soon as we learned of the diagnosis, we initiated a multidisciplinary team to begin the months of preparation needed to ensure that everything went smoothly in the delivery room,” says Jason C. Fisher, MD, pediatric surgeon, director of Children’s Surgical Services. for Hassenfeld Children’s Hospital, and director of the Division of Pediatric Surgery. “When you have a case of such complexity, you can’t do it alone. You need to have a medical center that offers all these subspecialists in one setting and that’s Hassenfeld Children’s Hospital at NYU Langone.”

Instead of a traditional birth, an innovative surgical approach, the Ex Utero Intrapartum Treatment, or EXIT, was needed to deliver the baby.

“The most important thing about CHAOS is early diagnosis, detailed fetal assessment and an adequate postnatal intervention for establishing an airway,” says pediatric head and neck surgeon Scott M. Rickert, MD, director of the Division of Pediatric Otolaryngology and co-director of the Pediatric Aerodigestive Center at Hassenfeld Children’s Hospital.

Understanding the risks and obstacles, the Martins were determined to become a family of three.

About the EXIT Procedure

On August 3, 2021, 38-year-old Yadi underwent an EXIT procedure, a high-risk, complex delivery for her and the baby.

In the mother’s womb, the fetus exchanges oxygen through the umbilical cord. “Once the umbilical cord is cut,” says Dr. Roman, “the baby will no longer receive oxygen since it is not able to breathe independently due to the obstructed airway.”

During the EXIT procedure, the baby’s head and shoulders are delivered by a cesarean section, leaving everything below the chest in utero and the umbilical cord and placenta intact to continue receiving oxygen from Yadi while pediatric surgeons work to establish an airway.

“It’s like pausing mid-birth,” says Dr. Roman. “The minute this baby’s head is out, there’s a five-to-ten-minute window to establish an airway, requiring full coordination and months of practice and planning.”

Because of the complex nature of the case, the Martins had a team of over 25 providers within NYU Langone specially trained from maternal fetal medicine, neonatology, pediatric surgery, pediatric ENT, and pediatric anesthesiology working together to deliver their baby boy.

The EXIT delivery team featured Dr. Roman, who led the surgery and delivery of the baby in order for the airway to be established; Dr. Rickert, who worked to evaluate Aydin’s airway and complete a tracheostomy, a surgical procedure to create an opening through the neck into the trachea; and Dr. Fisher, who conducted further interventions on Aydin once fully delivered.

“One of the biggest challenges for me prior to the birth was not fully understanding how blocked the airway was,” says Dr. Rickert. “Upon evaluation, there was no opening to the airway whatsoever. So, we bypassed the blockage by placing a tracheotomy, successfully providing a quick intervention to then complete the delivery. But just because we had the airway secure and him breathing safely didn’t means that Aydin was fully in the clear.”

Complex Care in the OR

Since Aydin’s lungs were inflated as a result of the airway obstruction, this put pressure on his heart, which affected its ability to function. Moments after the EXIT, neonatologists started to resuscitate Aydin but it was clear his heart was not recovering. Dr. Fisher made the quick decision to initiate ECMO support or extracorporeal membrane oxygenation, a treatment that takes over the work of the heart and lungs, allowing Aydin time to heal.

“Once he was stable, we made a final discovery—Aydin had another birth defect. An anorectal malformation, meaning his anus hadn’t formed properly,” explains Dr. Fisher. “We planned for every contingency imaginable, and he still threw us some curve balls.”

Aydin was transferred to the NICU in critical condition, but with an assisted airway established.

Dedicated Care in the NICU

Twenty-four hours after birth, the care team made the decision to wean Aydin off ECMO support. “Aydin’s success in the discontinuation of ECMO therapy was a huge indication that his health was starting to improve,” says Dr. Fisher.

Over the next 169 days in the NICU, Aydin miraculously got stronger, overcoming various obstacles and hitting important milestones along the way.

On September 7, 2021, Yadi and Jamaal were finally able to hold Aydin for the first time, a huge moment for the grateful parents. “We’re so lucky he’s alive and in our arms,” ​​recalled the Martins.

On Yadi’s 39th birthday, January 19, 2022, Aydin was transferred from the NICU at Hassenfeld Children’s Hospital to Children’s Specialized Hospital in New Brunswick, New Jersey, a rehab facility that would help Martin’s prepare to take Aydin home.

A Bright Future Ahead

Aydin continued to improve and was brought home to Brooklyn for the first time six months later, celebrating his first birthday on August 3. The Martins are most looking forward to watching Aydin grow like a normal baby now that he’s home and out of the hospital.

“While Aydin is doing remarkably well, he has at least one more surgery necessary before he will be able to breathe completely on his own,” says Dr. Rickert. “We plan to keep monitoring Aydin’s airway and do a reconstruction in the next few years when he’s grown a bit bigger.”

Aydin’s care team is optimistic about his future.

“The team at Hassenfeld Children’s Hospital is now family to us,” says Aydin’s mother Yadi. “We were in the safest place we could be for us – and for Aydin. I am forever grateful.” 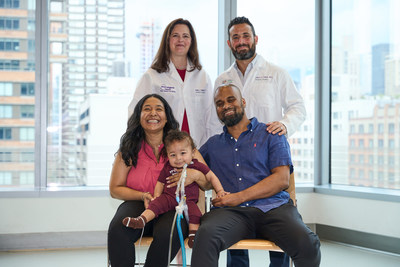