There may be no giant banners or flapping pennants above these deals, but there is a big sale going on in the automotive industry.

Four of the top 11 companies on the Undervalued Predictable screener, when sorted by discounted earnings, are selling at what we might call “below-dealer cost.”

Group 1 (GPI, Financial) operated 202 auto dealerships, 147 in the US and 55 in the United Kingdom, at the end of 2021. Using its omni-channel platform, it sells new and used cars and light trucks. In addition, it provides maintenance and repair services, vehicle parts, financing and insurance.

The Houston-based company has high outperformance potential with a GF Score of 94 out of 100. 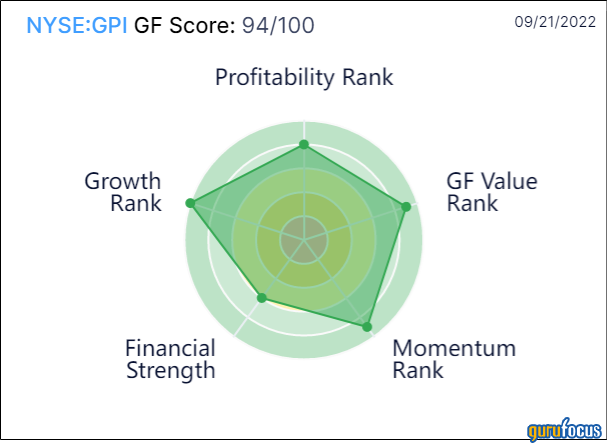 According to the discounted earnings calculator, Group 1 has an 89.46% margin of safety (all stock prices shown in the calculators are after market close on Sept. 20): 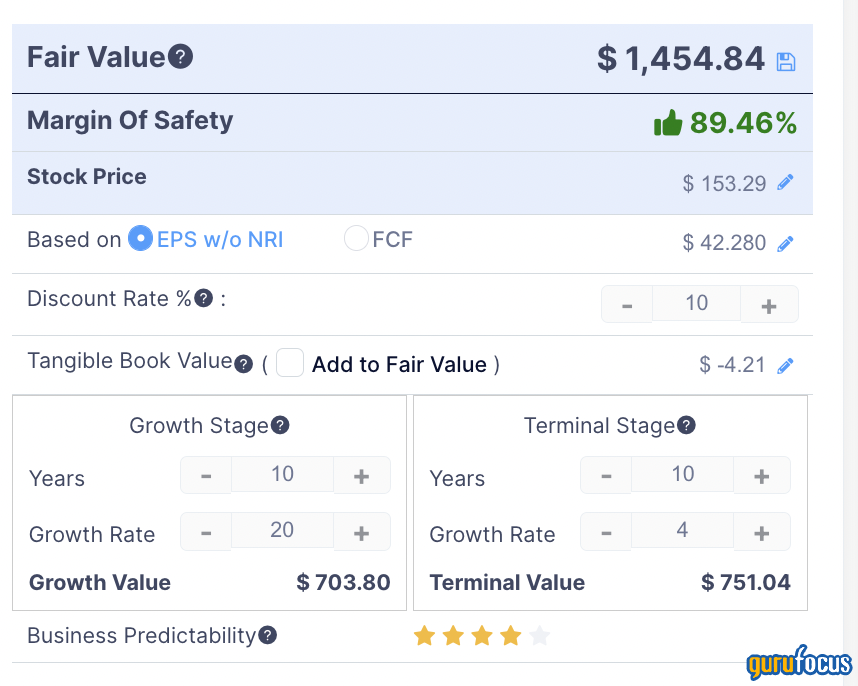 Note the default growth rate used by the calculator is 20% per year over the next decade. That may seem high, but over the past 10 years its earnings per share without non-recurring items has grown an average of 21.60% per year.

Based on historical ratios, past financial performance and analysts’ future earnings projections, the GF Value Line considers Group 1 to be modestly undervalued. The price-earnings and PEG ratios back that up with scores of 3.92 and 0.16 respectively. 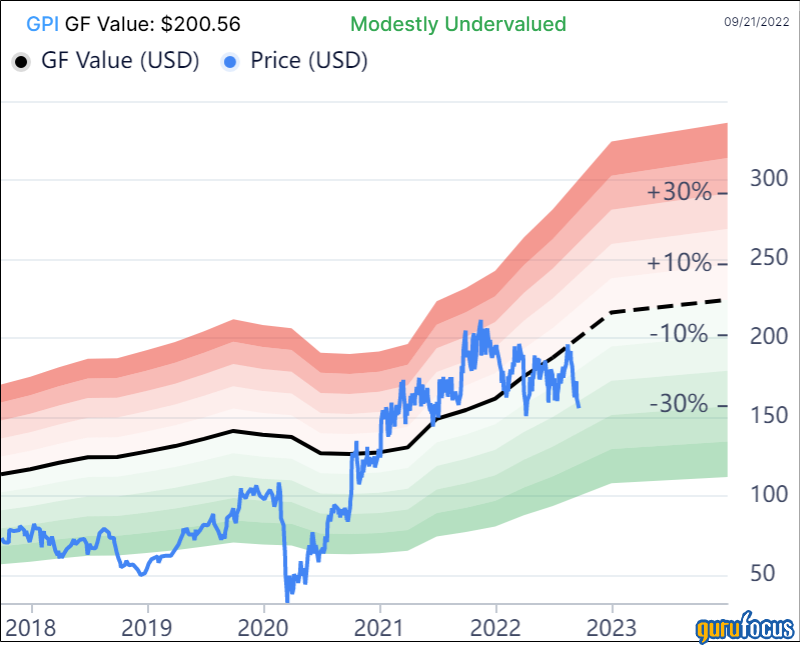 It, too, operates an omni-channel platform, through which it sells 31 brands of new vehicles. In late 2020, it introduced Clicklane, which it calls “the automotive retail industry’s first, end-to-end, 100% online vehicle retail tool.”

It is another fast-growing company, averaging earnings per share without NRI growth of 26.5% per year over the past decade: 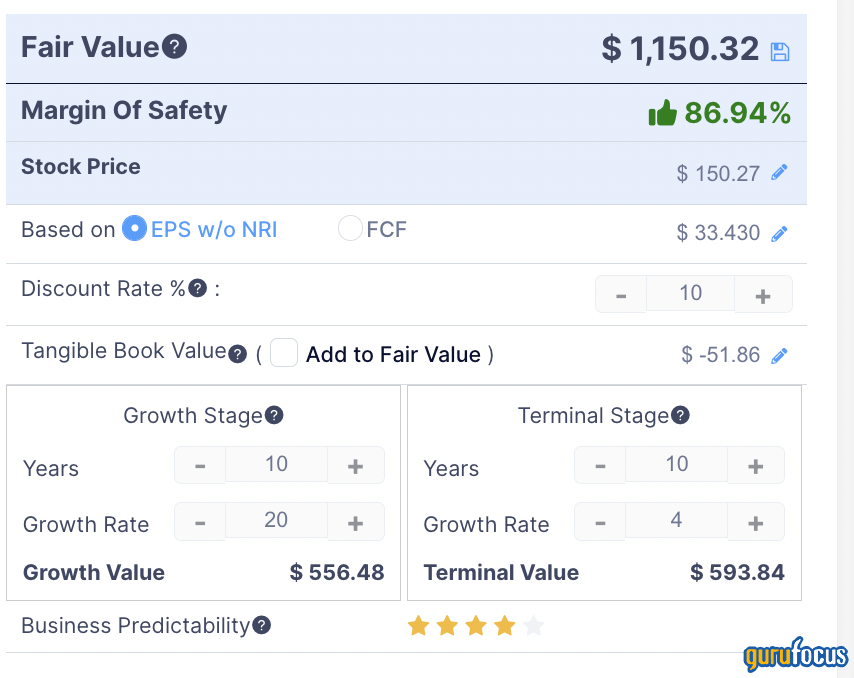 The GF Value Line pins it as modestly undervalued, while the price-earnings ratio comes in at 4.43 and its PEG ratio at 0.23. 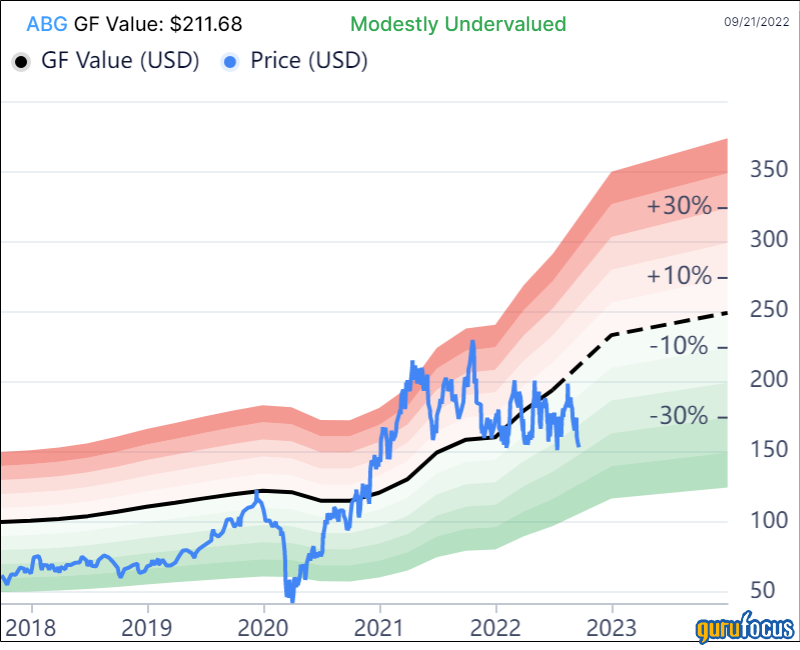 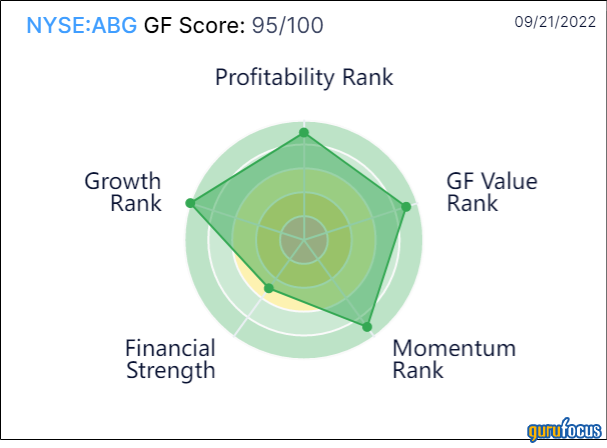 Penske (PAG, Financial) has a solid base in the US, but is also more active in international markets than Group 1 and Asbury. It owns 152 light vehicle stores in the US (including Puerto Rico) and 180 franchised dealerships in other countries, including the UK, Canada, Germany and Japan.

It reports that over 90% of its revenue comes from luxury and import names. Other revenue generators include parts and service, finance and insurance.

Additionally, its Premier Truck Group owns 39 truck dealerships. It also owns a 28.9% stake in Penske Transportation Solutions, which manages a fleet of more than 360,000 vehicles.

The discount earnings calculator finds another large margin of safety for Penske at 81.32%: 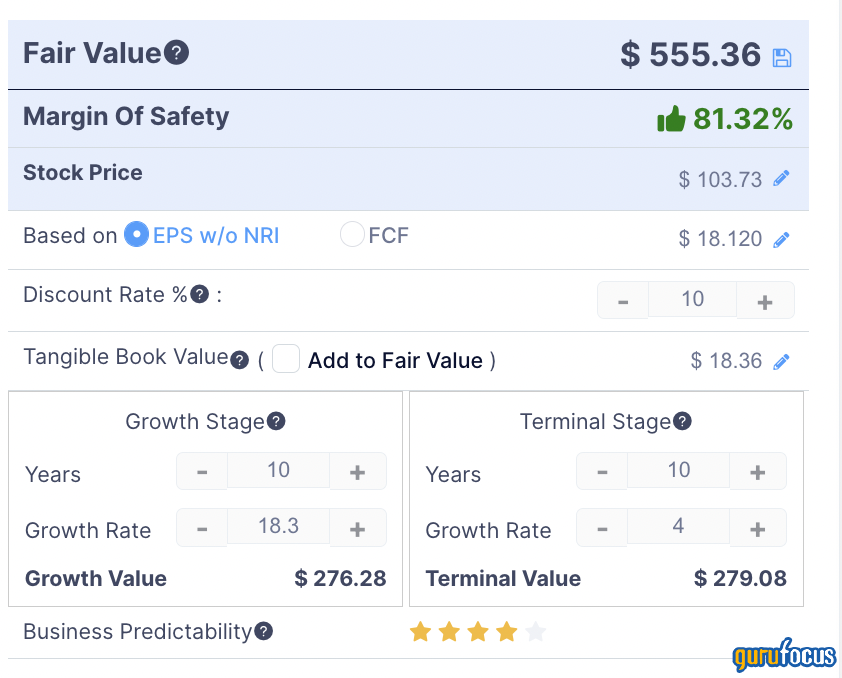 On other valuation measures, there is less of a consensus, with the GF Value Line concluding that the company is modestly overvalued. Still, the price-earnings ratio of 5.53 is well below the vehicles and parts industry median of 18.07. The PEG ratio is also quite low at 0.31. 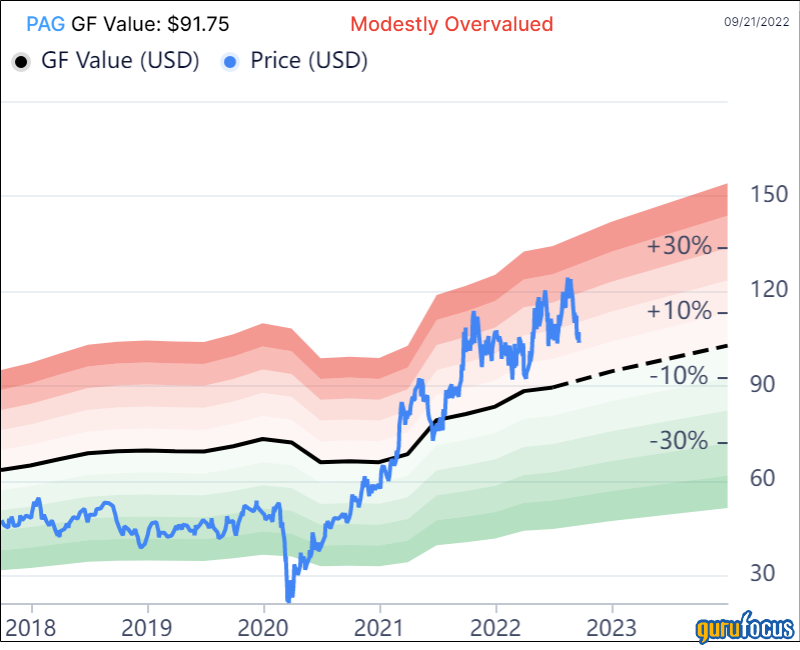 And there is another high GF Score of 89 out of 100 for Penske, indicating it has good outperformance potential. 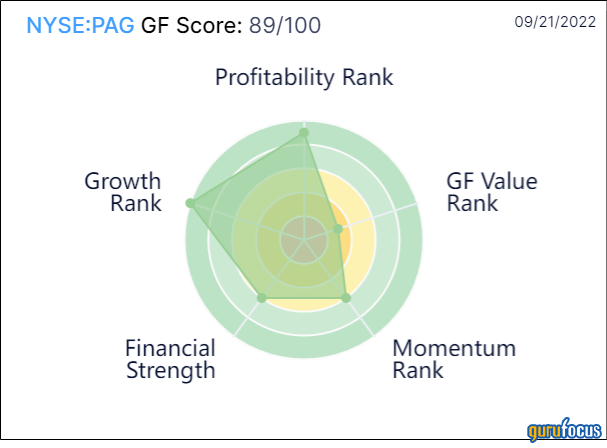 In its 10-K for 2021, Fort Lauderdale, Florida-based AutoNation (AN, Financial) calls itself the “largest automobile dealership in the United States.” At the end of 2021, it owned and operated 339 new vehicle franchises from 247 stores, mostly in major cities in the Sunbelt.

Its business strategy involves investments that will enhance retail customer experiences, support expanding its market share and leverage its scale and cost structure to expand in its core and other markets.

According to the discounted earnings calculator, the stock is significantly undervalued: 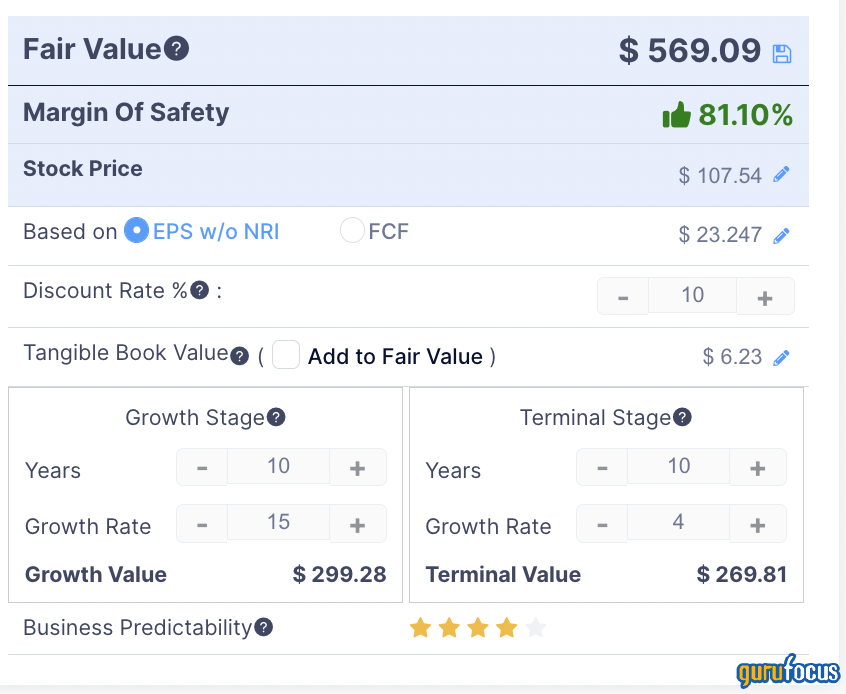 AutoNation’s earnings per share without NRI growth rate has not had as much zip as the other three companies with just an average of 15% per year over the past decade.

While the DCF calculator sees deep undervaluation, the GF Value Line reports modest undervaluation. The price-earnings and PEG ratios come down somewhere in the middle, with ratios of 4.48 and 0.27. 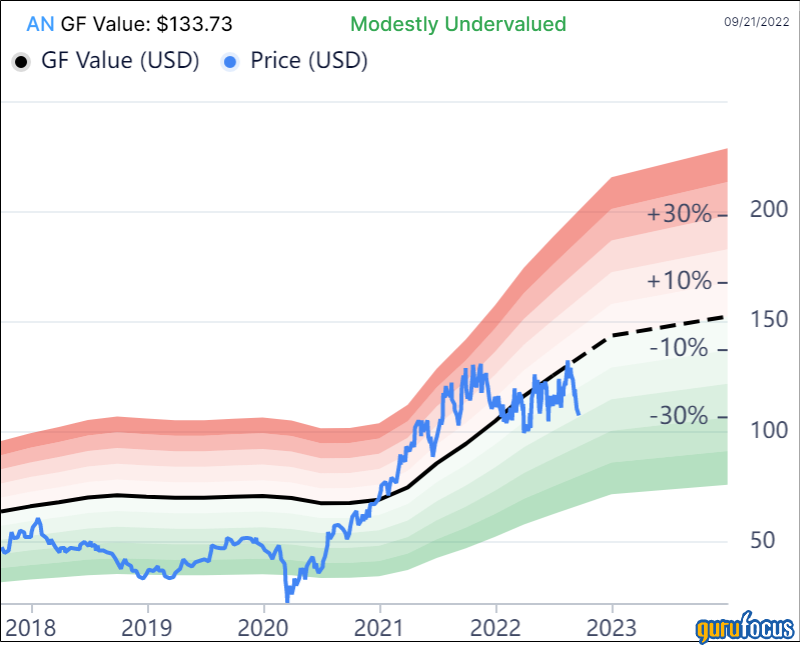 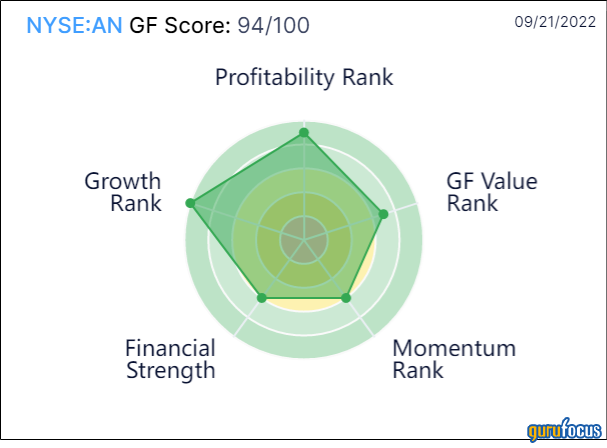 There are four companies in the vehicle and parts industry with robust fundamentals and bargain prices.

Generally speaking, choosing one company out of the four will depend more on subtleties than big differences. Among those subtleties is the amount of foreign exposure available and the degree of scale desired.